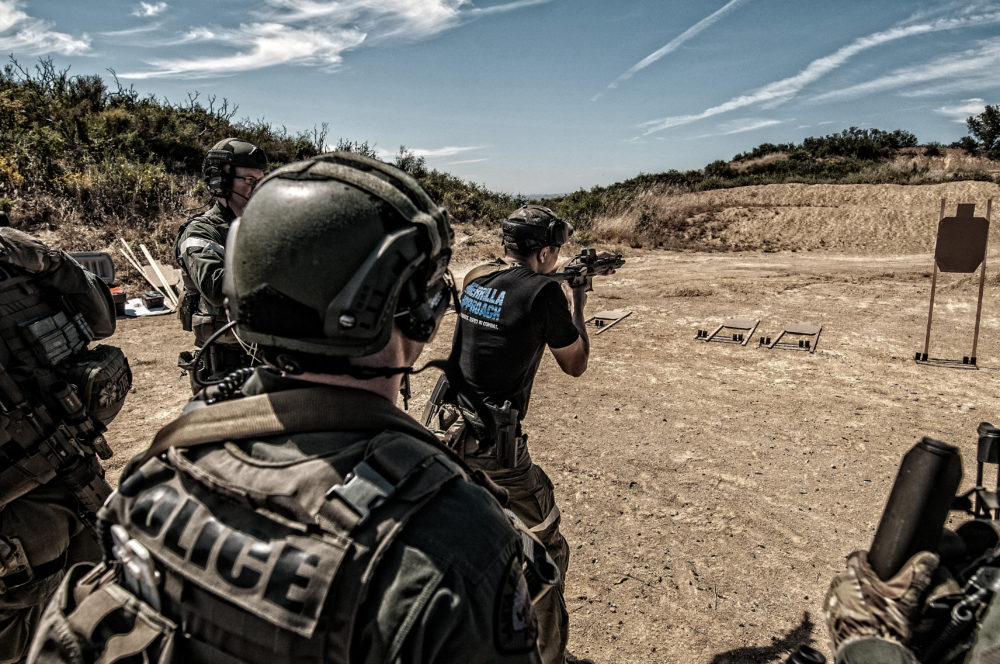 Posted at 02:48h in Uncategorized by Aaron Barruga 0 Comments

Eight years ago a DVD series was released that caused a paradigm shift within tactical training. Instead of the typical “stand still and shoot a target from the 5, 10, and 20 yard line” type of training; we saw a duo of instructors run their guns hard in aggressive shooting exercises. Despite the controversy that arose later about instructor credentials and the materials’ real world applicability, the videos started a necessary discussion regarding the next evolution of tactical training.

As a result, an entire generation of shooters developed their marksmanship skills and tactical mindset with those DVDs as the foundation. Almost a decade later, the community has started to shift away from the overly animated shooting techniques taught in those DVDs. Push back from other instructors (with credentials that aren’t in question) made apparent the problematic approach of treating every shooting drill like an audition for Hollywood stuntman work.

Close contact occurs in fractions of seconds. At a walking pace, in 1 second an adult male can cover the distance of about 5 feet. At a full sprint it is almost triple that distance. I had a student demonstrate this during the introduction of Sunday’s course. With the shot timer set to a par of 1 second, a student walked at a comfortable pace and we measured the distance covered. On a flat range 25 yards wide by 100 yards deep, 5 feet may seem insignificant. However, mindset should be applied to close contact. If an officer is engaging an armed suspect inside a room that measures 10’x10’, 5 feet becomes a critical margin for survivability.

Five feet covered in 1 second roughly translates to about 3 feet in half a second, and 1 foot (or arms length extension) in a 1/10 of a second. Time can be measured in relation to distance, but can also be applied to the rate at which a gun cycles ammunition. Most rifles can mechanically cycle a round at 1/10 of a second. In a CQB fight, unnecessary movement that costs you 1/10 of a second can amount to either the threat shooting an additional bullet at you, or an individual crashing your lines for hand-to-hand combat.

We shot various timed diagnostics and marksmanship drills that reiterated the negative gains associated with overly animated shooting techniques. These exercises focussed on overlooked subtleties such as added torso movement in carbine-pistol transitions, or worse, the erroneous checking of a bolt carrier group prior to a transition. Although the DVDs released eight years ago should be acknowledged for their willingness to push the contemporary boundaries of training, their contribution of the “check your ejection port to observe the status of your carbine before transition” technique is an extremely dangerous and unnecessary move to perform in a close quarter fight.

Adding unnecessary movement to the transition of a secondary weapon costs time and distance. You gain absolutely nothing by observing your bolt carrier group and ejection port when the most important thing in your life is getting a usable weapon ready for use. Moreover, the speed at which students are taught to check their ejection port does nothing for them. They do not receive any visual data because the gun moves too quickly. The action is also irrelevant at night because you would need a white light to visually inspect the ejection port or would need to physically feel it with your hands. Regardless, added time that is unnecessary.

While shooting exercises at the 7-yard line, it took a while for this reality to set in for the students unlearning bad habits. Once we transitioned to shooting and moving exercises that demanded rapid threat ID and target engagement in close quarters, it became more apparent that close-quarter housework lives and dies within fractions of seconds.

Awesome group of students. Burrow Canyon is a great facility that I will definitely visit again!