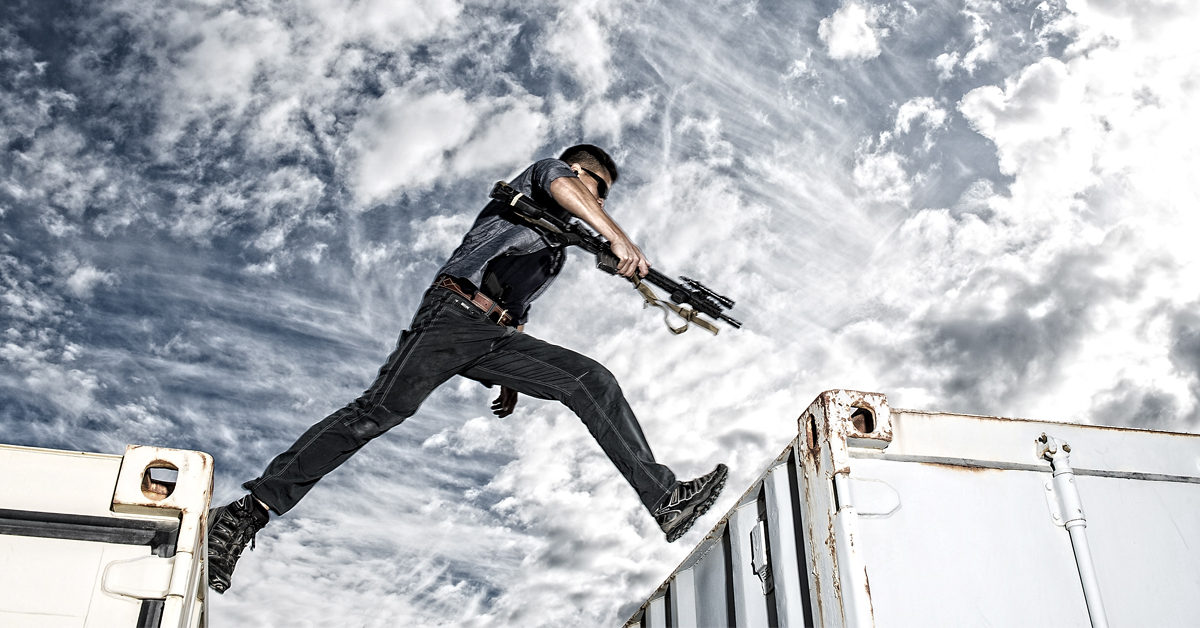 Two days into what was supposed to be a four day mission, my overwatch element was frantically scurrying down ridge lines to avoid being cutoff by Taliban forces that were coordinating an ambush. The hasty exfil lasted a few hours and at multiple points we sacrificed security for raw speed. During moments such as these, I was thankful for all that dumb Army training that served no other purpose than to teach me how to “embrace the suck.” Countless hours spent training under a rucksack paid dividends on days that demonstrated that sometimes grit is the most powerful weapon.

In training, running with a rucksack is one of the worst things a soldier can do because of the trauma it causes to the knees, shoulders, and lower back. Regardless, this doesn’t excuse a soldier from having to perform such a task in combat. Whether a forced march or carrying combined loads up to 200lbs in Assessment and Selection, a soldier must become accustomed to the discomfort caused by his equipment. However, it is important to differentiate between when a soldier is training to endure suffering, versus when he is perfecting a technical skill. As of late, confusion with whether harder is always better can be observed in contemporary stress shoots.

We need to make stress shoots simple again. What were once straightforward exercises that measured altered performance through an elevated heart rate, have become events that place more emphasis on Crossfiting with a gun than actually improving marksmanship abilities. Worse, the Type A personalities inherent with tactical professionals, combined with the sloppy design of stress shoots create an environment that is ripe for injury.

For example, olympic lifting in full kit is a terrible idea. Although impressive, performing such action unnecessarily exposes a shooter to career stalling bodily damage. The risk isn’t just that adding weight via kit causes an adjustment in form, it’s also that a shooter will attempt to perform an exercise as quickly as possible. Consequently, individuals will sacrifice the quality of their movement or form, so that they can “ugh” their way through to the next exercise to achieve a faster time.

From a marksmanship standpoint, sloppy stress shoots plateau development because a shooter will focus on the wrong aspects of his performance. Satisfaction results from completing a difficult task, not from actually testing skill. Whether flipping tires, carrying kettle bells, or running through an obstacle course, a tactical professional will inherently focus on and reward himself for accomplishing the anaerobic qualities of a stress shoot rather than assess how the event improved his marksmanship.

However, poor stress shoot design within training culture does not excuse tactical professionals from learning how to shoot with an elevated heart rate. Moreover, anaerobic activities such as flipping tires and heaving sandbags can be useful, so long as cadre differentiate between diminishing returns and skills progression. In order to be executed properly, stress shoots must be programmed through one of two methods.

The Sustainment Stress Shoot teaches the effects of shooting with an elevated heart rate through short bursts of aerobic or anaerobic activity. This can be accomplished through sprints or carrying weights, however, the physical exercise should never overshadow the marksmanship points of performance. Sustainment Stress Shoots are also shorter in duration to prevent the effects of diminishing returns and the unintended solidifying of sloppy technique.

Sustainment Stress Shoots should not just blindly throw shooters into an exercise. If the event requires the shooter to run, cadre must assess the shooter’s sprint mechanics and weapons handling efficiency. This is more than just cataloging the speed at which the shooter moves, and demands cadre observe explosive acceleration and deceleration sprint mechanics, muzzle orientation, and efficiency with prepping the weapon as a shooter prepares to fire. Similarly, if a shooter must carry weights the cadre should assess the shooter’s ability to rapidly stow and unstow a weapon for travel.

Although not primary to skills development, cadre must remain mindful with enforcing that weapons should be carried or stowed in a manner applicable to a combat environment. Crossfiting with a carbine has led lazy carrying positions in which shooters unnecessarily take their firing hands off their pistol grips and away from their safeties and triggers. Although not catastrophic during a stress shoot (because the shooter knows exactly where and when he will use his weapon) we’ve seen these techniques filter into tactical training events in which shooters are delayed with employing their weapons towards unexpected close quarter targets or in force on force scenarios. If, however, a shooter must move his firing hand away from his trigger and safety, it should because a physical task (e.g. casualty carry, climbing, jumping, etc.) allows for no other options.

Sustainment Stress Shoots also demand that cadre be engaged the entire time. They must be able to catalogue a shooter’s performance flaws and not simply state that a shooter missed because of fatigue.

Below is Throttle Control. It is designed as a Sustainment Stress Shoot that assesses sprint mechanics and marksmanship with an elevated heart rate.

The second type of stress shoot is the Resiliency Stress Shoot. These events are meant to be smokers and reinforce just that, resiliency. However, their purpose is still to test skill, and not just reward a shooter for accomplishing something difficult. Because the Resiliency Stress Shoot will place a higher premium on aerobic and anaerobic tasks than marksmanship skill, they should only be performed after Sustainment Stress Shoots are executed as diagnostics. This ensures that a shooter is still learning, and not just running in place—physically and metaphorically—with regards to performance.

Collecting performance data during Resiliency Stress Shoots is more difficult because of the switch in exercises. For example, did Shooter X finish before Shooter Y because he climbed ropes quicker, or because he flipped tires the fastest? Ambiguity such as this is removed through strict penalties for marksmanship failure. This helps to level out the ranking system so that the worst shooter cannot win because he is in the best physical shape. An example of such design is adding a devastating time penalty (e.g. +10 seconds) for first round misses. This accountability encourages shooters to go for speed with sprints or kettle bell carries without allowing for sloppy marksmanship.

Resiliency Stress Shoots should only be performed after multiple Sustainment Stress Shoots are executed as a diagnostic. Failure to do so ensures that a shooter will plateau with regards to performance because the purpose of the event lacks clarity. This results in a shooter assuming that because he accomplishes something hard that his skill is increasing. Although his skill might improve, it is likely in areas associated with weight lifting instead of marksmanship.

If possible, Resiliency Stress Shoot exercises should also attempt to replicate real world obstacles that the shooter can expect to navigate such as urban climbing, carrying a casualty, or breaching a door.

In summary, this article critiques sloppy stress shoot design and its effects on marksmanship progression. However, it is not intended to pardon tactical professionals from learning to shoot in full kit and with an elevated heart rate. Instead, it demands that we perform such actions through more purposeful methods. This can require shooters to actually perform entire training sessions absent of kit and with just their weapons. Furthermore, tactical professionals are also not excused from performing tasks in which the only learning objective is endured suffering. We simply need to be smarter about an event’s goals, and whether we’re unnecessarily risking injury and performance plateau.